If you're reading this, you're part of the 1% who haven't been living under a rock and either altready have an HTC Vive, or are debating getting one.

Let's settle the debate first: if you are at all considering whether you should get one, then you need to order one right now. If you can't decide which VR system to get, the answer is still the same: you need to get the best VR system out there right, and that's the Vive. 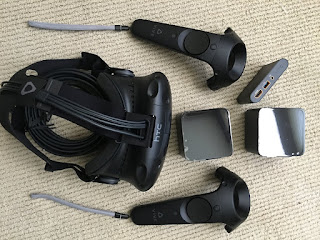 Now that that's out of the way, you'll probably want to start shopping for apps. Some of them are really good, others are equally bad. Moreover, it's not always clear at the outset which is which.

Since I've convinced several friends to order their own Vive, and have had several weeks to figure out which VR apps I like the most, I've been getting a lot of requests for recommendations.

So, I thought I'd start by sharing my list (Fred's VR List — Games for the HTC Vive you'll want to buy) with you.

Once you've exhausted that list, you'll want to do you own shopping, which means deciding which of the 200+ HTC Vive games on Steam are worth checking out. Here are a few tricks for navigating this growing list of apps:
If there's games not on my list that should be, let me know.
Posted by Unknown at 9:30 PM