Our crazyflie's inaugural flight was quite exciting! She quickly soared to the daring height of roughly twelve feet. In fear of imminent collision with the the ceiling we let go of the thrust control. Crazyflie responded with equal daring, quickly succumbing to gravity's pull. She headed downward at great speed. She immediately sacrificed one wing to break her fall. 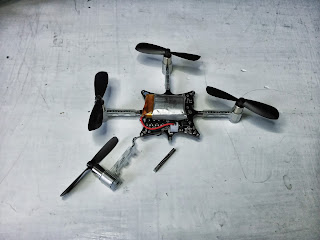 Now what? We were certainly prepared to do some tinkering: we expected to lose a motor or one of its mounts here and there. We had great plans for her. However, we did not expect to be presented with such a significant repair so early in her life.


Trough some trial and error I think we came up with a fairly good design:


Our first repair attempt involved printing thingiverse 95216, but this added a lot of weight and quickly broke as well: 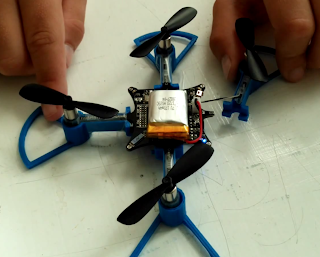 After some experimenting, we ended up with a pretty good toothpick design: 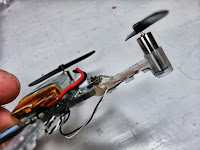 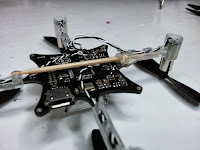 Each toothpick would average about ten crashes before it had to be replaced. The design also had a couple of other minor issues:


Inspired, we took our toothpick design to the next level, with a 3d part of our own design: 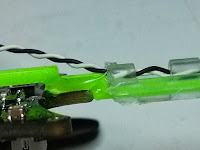 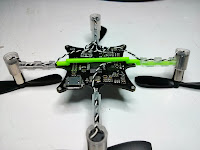 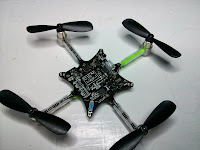 After spending some time flying, crashing and repairing our crazyflie, I thought I'd share some thoughts on the wing design. No matter what wing design you choose, you're making an engineering trade off between strength and weight. Strength is actually a complicated subject with its own trade offs. A stiffer part will be able to withstand greater impact forcing, but will transfer those forces to the rest of the system. A weaker part with absorb more of the impact, protecting the rest of the unit, but with increased risk of itself breaking.

The current crazyflie wing design has relatively thin (light) stiff wings which become wider at the point where they are attached to the main board. This means that when the wings break, they almost certainly will break at the point where their width goes from narrow to wide. When it comes to repairs, this is obviously the most inconvenient point for a break.

Why not just make the wings wider (stronger), so they don't break as easily? While a stiffer design would certainly save some wings from bigger crashes, at some point we're going to start having main boards go bad because of the higher g forces during ever bigger crashes.

What we really need is a sacrificial wing part. Just like the motor mounts, which were designed to sacrifice themselves in order to spare motors which would otherwise be damaged, I think we want sacrificial wings.

The thing with sacrificial parts is that they, well, sacrifice themselves. They break. So, these parts need to be cheap and easily replaced, ideally without any tools. The thing I don't like about the motor mount design is that replacing a motor mount requires a soldering iron to detach and reattach the motor wires after stringing them through the mount.

Here's my proposal: redesign crazyflie so that instead of four wings it has four wing mounts. Design a very simple wing which...

This last point is important, because it means you can use a toothpick in a pinch.
Posted by Unknown at 11:04 AM No comments:

Before we get started

I've been playing around with phpBB on App Engine's new experimental PHP runtime environment, using Cloud SQL for the backend database. While it wasn't too much effort to get it a site up and running I thought it would be useful to document the steps I went through here so others can follow along. Let me know in the comments if these steps don't work for you, or if there's additional changes you ended up making to the phpBB source to address more advanced features.

This guide follows roughly these steps:

Here are the step by step instructions: 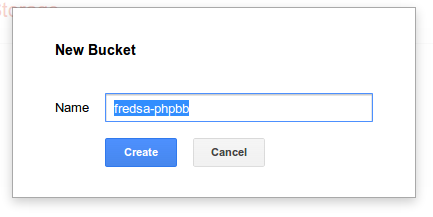 Copy your favorite favicon.ico into the main phpBB directory (i.e the same directory where common.php can be found)

Modify the app to be App Engine compatible

The above app.yaml should already take care of these phpBB 3.0.11 files, although it wouldn't hurt for you to independently verify this.

Replace all uses of preg_replace() with /e (PREG_REPLACE_EVAL)